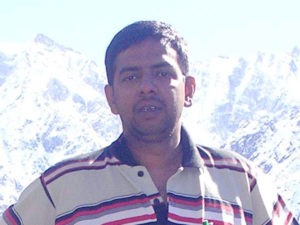 Debashish Ghosh was awarded the Doctor of Philosophy degree for his thesis, “Bioprospecting in the deltaic Sundarbans for marine microorganisms producing commercially important bioactive compounds” in 2004. Debashish is now an independent researcher working as a Scientist (Biotechnology Area), Biofuel Division of the Indian Institute of Petroleum (CSIR-IIP), Dehradun under the Council of Scientific & Industrial Research, Government of India and his interests include bioprospecting and bioprocessing, second generation biofuel and environmental biotechnology. He has recently completed a research project entitled “Bioprospecting for novel antimicrobials and industrially important enzymes from microbial isolates in the Uttarakhand Himalayas” and is supervising a number of doctoral and post graduate students. Previously Debashish worked as a Senior Lecturer in the Department of Biotechnology, Sardar Bhagwan Singh Post Graduate Institute of Biomedical Sciences and Research, Balawala, Dehradun. 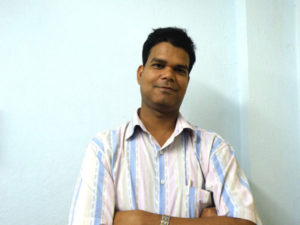 Malay Saha obtained his Doctor of Philosophy degree in 2005 for his research work styled as “Investigation of Antibiotic Producing Marine Actinobacteria of the Sundarbans: Taxonomy, Production and Characterization”. Thereafter, Malay pursued his career in the biotechnology industry as an Executive Scientist and functional head, Microbiology Division at CavinKare Research Centre, (FMCG) Chennai. His responsibilities included provision of timely, reliable and comprehensive data for all products through relevant microbiological evaluations and provision of expert inputs in terms of regulatory guidelines and improvement in antimicrobial efficacy/ quality standards in products and manufacturing processes. Presently Malay is Lecturer in Botany, Sovarani Memorial College (Jagatballvpur, Howrah) under the University of Calcutta. 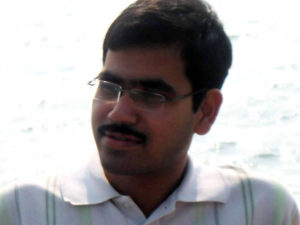 Barindra Sana was awarded the Doctor of Philosophy degree in 2007 for his thesis entitled, “Purification and characterization of industrially important enzymes produced by marine microorganisms isolated from the deltaic Sundarbans”. He was recruited as a scientist in the Central Salt and Marine Chemical Research Institute (CSMCRI), CSIR, Government of India and was working on the development of fermentation and downstream processes for specific products of marine microbial or algal origin. Presently Barindra is a postdoctoral scientist in the Division of Bioengineering, School of Chemical and Biomedical Engineering, Nanyang Technological University, Singapore and his present research area is overexpression, purification and study of folding pattern of recombinant proteins from marine archae. 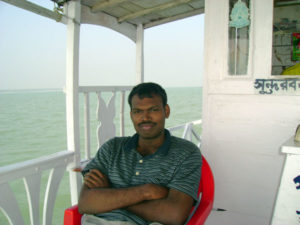 Arumugam Meyyappan, obtained his Doctor of Philosophy (Pharmacy) degree in 2010 on the thesis “Identification of marine actinomycetes of the Sundarbans, isolation and molecular characterization of their bioactive metabolites”. His doctoral work led to the isolation of 2-allyloxyphenol as a natural product for the first time and establishment of the first type strain isolated from the Sundarbans, Streptomyces sundarbansensis. In addition, Arumugam enthusiastically participated in the research activity of our collaborator, Dr. Jaisankar where he identified anticancer, antioxidant and antimicrobial activities of bark extracts from the medicinal plants Commiphora berryi and Commiphora caudate. Arumugam is now employed by Shantha Biotech and posted as a scientist in Hyderabad. 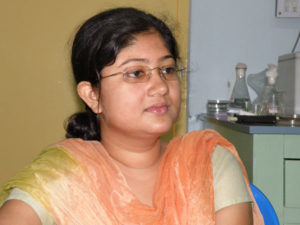 Anindita Mitra was awarded the Doctor of Philosophy degree in 2010 for her research on bioprospecting of marine Actinomycetes from the Indian Sundarbans. Her doctoral work established that, in the Sundarbans, high antagonistic potential (AP, an ecological parameter first described) sampling sites were influenced by tides, while the low AP sites were not. Molecular phylogenetic analysis, morphological, physiological and biochemical characteristics of actinomycetes of high AP sites were also studied. She was an Assistant Professor of this School from Jan 2011 to July 2011. Presently Anindita is a postdoctoral fellow at the Max-Planck Research Institute in Garching, Germany and working as microbiologist in the Plasma Medicine project. She is the recipient of the prestigious Max-Planck Research Fellowship. Anindita also qualified in the UGC-NET and ICAR-NET in 2004. 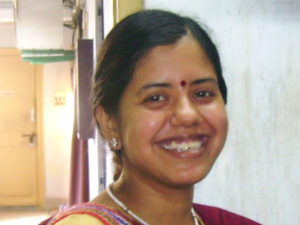 Sreyashi Sarkar, currently working as a CSIR Research Associate in the Department of Chemical Engineering, Jadavpur University, possesses a Bachelor of Technology degree in Food Technology and Biochemical Engineering (2002) and a Master of Technology degree in Biotechnology (2004) from Jadavpur University, Kolkata. She obtained Ph.D. (Engg.) degree in the year 2010 from Jadavpur University. She has also worked as a CSIR Direct Senior Research Fellow (2005-2009). She has also qualified the GATE in 2006. Her current post doctoral work is mainly on the design of novel biofilm reactor (conico cylindrical flask or CCF) and the production of bioactive compounds from marine as well as terrestrial biofilm-formers in the CCF. Her post doctoral work has been published in reputed international journals and has been filed as a US patent by CSIR. She secured a medal for the best presentation in the international conference “Biotechnology for Better Tomorrow 2011” held at Aurangabad, India. Sreyashi’s doctoral thesis was concentrated on the design of novel niche-mimic bioreactors for the cultivation of salt-tolerant biofilm-forming marine actinobacteria isolated from the intertidal environment of the Sundarbans. Although an engineer by training, Sreyashi has proficiency in chemical structure elucidation, DNA isolation, PCR techniques and DNA sequencing. Sreyashi has undergone training in food processing industries. She also has a three months training on “Auto CAD with Auto LISP” from the Computer Aided Design Centre, Department of Computer Science and Engineering, Jadavpur University to her credit. 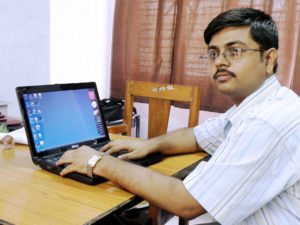 Arnab Pramanik worked as a Senior Research Fellow (ICMR) and his doctoral work was concentrated on the search of antibiotic lead compounds from marine cyanobacteria of the Sundarbans (2007 to 2012). He was awarded the Vidyasagar University silver medal for standing second in the Master’s degree examination in Microbiology. During his Ph. D. work Arnab worked on the isolation and characterization of cyanobacteria possessing antimicrobial activity from the Sundarbans. Arnab’s work involved experimental techniques like DNA isolation, PCR amplification, molecular phylogeny and related bioinformatics analyses, morphological identification of marine cyanobacteria, study of antibacterial activity as well as characterization of bioactive compounds. Presently he is working as Research Associate in the Department of Biochemistry, University of Calcutta in the World Bank and Ministry of Environment, Forest and Climate Change (Government of India) funded projects to explore the microbial diversity of the Sundarbans. 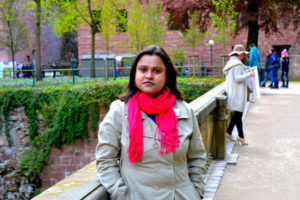 Sayani Mitra – After completing Masters in Biotechnology from Dept. of Life Science & Biotech, Jadavpur University, SayaniMitra joined as a PhD student in School of Environmental Studies in November, 2009. The objectives of her research were to establish novel methods for cultivating biofilm forming estuarine microorganisms. She evaluated the conico-cylindrical flask and rotating disk bioreactor for biofilm cultivation. She was selected for the senior research fellowship from CSIR in 2013. During her doctoral research, she published five research papers in international journals. After her PhD in January 2016, she worked as a post-doctoral researcher under the guidance of Prof. Roland Ulber, Technical University of Kaiserslautern, Germany. During her stay, she worked on the application of micro-milled metallic surfaces as biofilm substrata & online analysis of biofilm formation in flow-cell. Sayani is now working as a National Postdoctoral Fellow (NPDF) under Prof. Kasturi Mukhopadhyay, School of Environmental Science, Jawaharlal Nehru University, New Delhi. 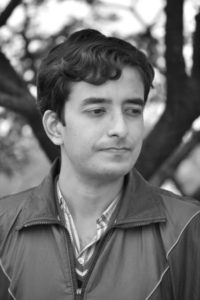 Anirban Bhattacharyya – Anirban worked as a Senior Research Fellow (DST INSPIRE), obtained Doctor of philosophy in the year 2016.His doctoral work was based on production of microbial bioplastics.Anirban holds a Bachelor of Science degree in zoology(2006) from Visva –Bharati, Santiniketan. He holds a Master of Science in Environmental Science (2008) achieving the distinction of first class first from Visva- Bharati, Santiniketan. He also holds a Master of Philosophy degree in Environmental Science (2010) from School of Environmental Studies, Jadavpur University.Anirban also qualified the UGC-NET examination in 2009.Currently he is working as a programme executive in Doordarshan Kendra(Indian State Television). 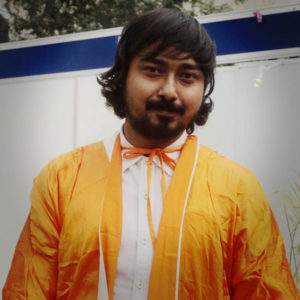 Jayanta D. Choudhury – Jayanta has been awarded Doctor of Philosophy in the year 2016. He worked as Senior Research Fellow (DST-INSPIRE) and worked on a bacterial strain pathogenic to the Great Barrier Reef (Australia) sponge, Rhopaloeides odorabile in collaboration with the Australian Institute of Marine Science, Townsville, Australia. The aim of his work was to identify the pathogen through polyphasic taxonomy, proteomic analysis of the collagenase enzyme and molecular examination of the virulent mechanisms.

Jayanta’s doctoral work will enhance the knowledge of sponge disease dynamics including the causative agents, modes of transmission and pathogen virulence mechanisms. Jayanta holds a Bachelor of Science degree in Zoology (2007) from Presidency College, Kolkata. He holds Master of Science in Environmental Science (2009) securing the first class first position from University of Calcutta. Jayanta got first position in the UGC NET examination 2013 in the subject environmental science. Currently he is working in the post of West Bengal Civil Service executive. 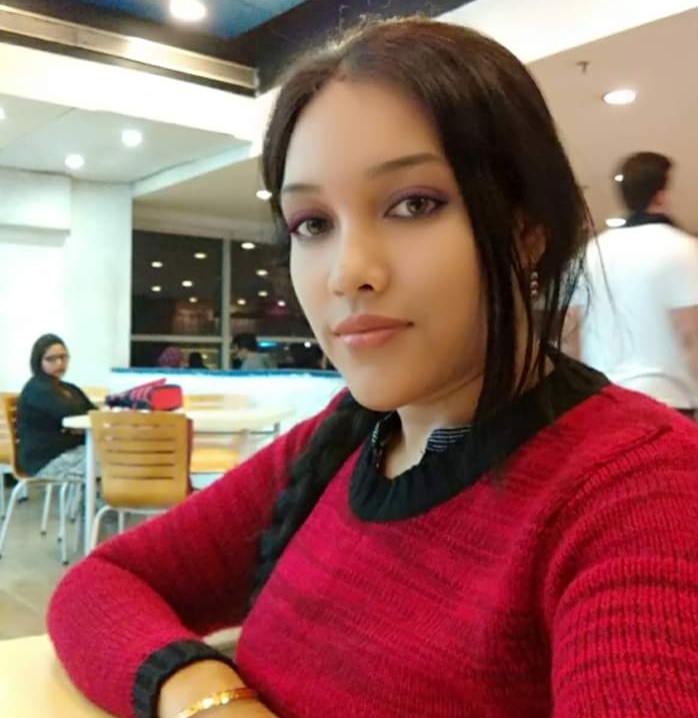 Malancha Roy is a Senior Research Fellow and working on the utilization of slaughter house effluents of the unorganized rural slaughter houses of South 24 Parganas (West Bengal). The objective of her doctoral work is to study the efficacy of converting waste blood emanating from small-scale rural slaughterhouses to an organic biofertilizer and soil conditioner by mixing blood meal with rumen digesta and other waste products. Malancha holds a Bachelor of Science degree in Zoology (2001) from the University of Calcutta, Master of Science degree in Zoology with Environmental Biology and Toxicology specialization (2003) and a Bachelor of Education degree in Biological Sciences (2005) from the University of Calcutta.. She also has a Master of Philosophy degree in Environmental Science (2010) from Jadavpur University securing the first class first position. She has previous work experience on the enhancement of soil fertility by the help of earthworm’s gut microfauna in the Zoology Department of the University of Calcutta and on the removal of waste dye materials from industrial wastewater using some low cost adsorbents in the Civil Engineering Department of Jadavpur University.She submitted her thesis  in the year 2018. She has been awarded with PhD degree in 2019. 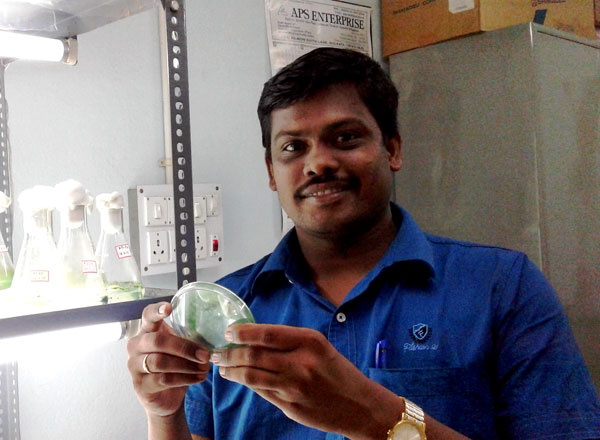 Dr. Veerabadhran Maruthanayagam, was a Postdoctoral Fellow (UGC Dr. D. S. Kothari Postdoctoral Fellowship) and worked on the mass cultivation of cyanobacteria and effective harvesting of biomass for various applications and scale-up in outdoor conditions. The main objectives of his postdoctoral work were cultivation of marine cyanobacteria in various media, to study the effect of light wavelength and intensity on biomass and biofilm formation study using different materials and bioreactors. Maruthu holds a Bachelor of Science degree in Zoology from The American College, Madurai (2006) and a Master of Science degree in Marine Biotechnology from Bharathidasan University, Tiruchirappalli (2008). Dr. Maruthanayagam holds a Doctor of Philosophy degree in Microbial Biotechnology (2014) from Department of Marine Biotechnology, Bharathidasan University. His Ph.D. thesis was titled, “Oscillatoria sp. – Potent Cyanotoxins and its Pharmacological Applications”. He also worked as a Senior Research Fellow (2013-15) in the MoES project at NIOT field centre, Kavaratti, Lakshadweep. 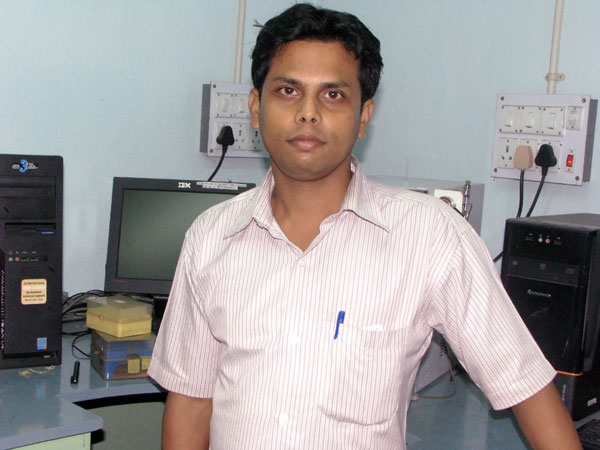 Kaushik Biswas is a Senior Research Fellow and working on genotypic and phenotypic identification of Actinobacterium MS 3/20 isolated from the Sundarbans. His work also encompasses purification and structure elucidation.of the bioactive compounds obtained from this actinobacterium. Kaushik holds a Bachelor of Pharmacy degree (2004) from Rajiv Gandhi University of Health Science, Karnataka. He holds Master of Pharmacy in Pharmacology (2007) with first class from Rajiv Gandhi Univerisity of Health Science, Karnataka. During his Master of Pharmacy studies, Kaushik worked on the phytochemical and pharmacological screening of leaf extract of the medicinal plant, Peltophorum pterocarpum. Kaushik has been awarded with PhD dgree in 2019.