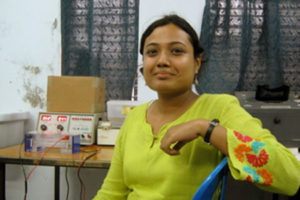 Riddhi Mahansaria, currently working as a Senior Research Fellow, has secured a Bachelors Degree in Microbiology from Scottish Church College (2009) and Masters Degree in Environmental Science from University of Calcutta (2011). She has done her postgraduate dissertation from Saha Institute of Nuclear Physics where she worked on DNA and protein expression of heat shock proteins in rice plants in response to arsenic and other abiotic stresses. Riddhi qualified GATE and UGC NET JRF examination in 2012. She used to work as a Research Worker in University of Calcutta and has experience in performing different water quality tests concerning various physical, chemical and microbiological parameters. As a part of her PhD work, she has isolated many haloarchaea and halobacteria from different saltpans of India and identified new halophilic microbes producing polyhydroxyalkanoates (bioplastics) by a novel PCR-based detection method. She is currently working on enhancing production of PHA in some selected haloarchaea using waste raw materials which could make bioplastic manufacture industrially feasible and cost effective. 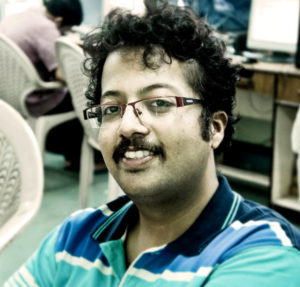 Sayak Bhattacharya, is a Senior Research Fellow working on collagenolytic enzyme characterization and virulent gene expression profiling of a marine sponge pathogen. Sayak has a Bachelor degree in Microbiology from University of Calcutta with first class (2012) and Masters degree from Pondicherry University in Microbiology with first class (2014). He has qualified NET-LS (2013) and GATE (2014). During his masters degree, Sayak worked on production and characterization of antibacterial pigment from marine Pseudomonas aeruginosa MBD002. 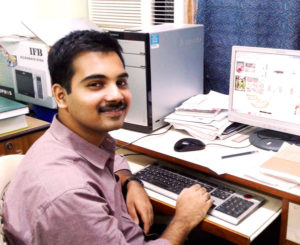 Sandeep Chakraborty, presently working as a Junior Research Fellow, has a Bachelor’s degree in Botany (2012) from West Bengal State University securing first class first position and Master’s degree in Botany (2014) from the University of Calcutta. During his postgraduate dissertation, he has studied the molecular, biochemical and physiological parameters of local rice cultivars of West Bengal in response to cadmium toxicity. He has qualified GATE (2014) and SET (2014) examination. Currently, he is working under a national level project “Drugs from the Sea” specifically on halophilic cyanobacteria isolated from the Indian Sundarbans. The aim of his doctoral work includes identification of these cyanobacterial strains by a polyphasic approach, study of their antimicrobial activity and scale-up of the biomass production by the strains. 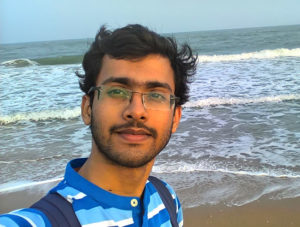 Dhruba Bhattacharya – Dhruba currently working as a JRF under DBT sponsored collaborative research project- “Mining the genome and metagenome of marine microbiome for pks-nrps biosynthetic gene clusters and bioactive small molecules. A coordinated R&D initiative in marine genomics”. He completed Master of Science in Botany with specialization in cytogenetics and plant breeding from University of Kalyani in 2014 and qualified CSIR-UGC NET in the same year. Part of his research work based on isolation and identification of antimicrobial metabolites produced by bacteria associated with marine sponges of the southern Bay of Bengal. 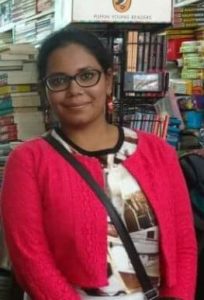 Shayontani Basu is a DST- Purse Fellow working on isolation of bio active compounds from cyanobacteria of the Sundarbans. Shayontani has a Bachelor degree in Microbiology from University of Calcutta with first class (2013) and Masters Degree in Marine Science from University of Calcutta with first class (2015). She is also pursuing her M.Phil in Oceanography and Coastal Management from School of Oceanographic Studies, Jadavpur University, from 2016. 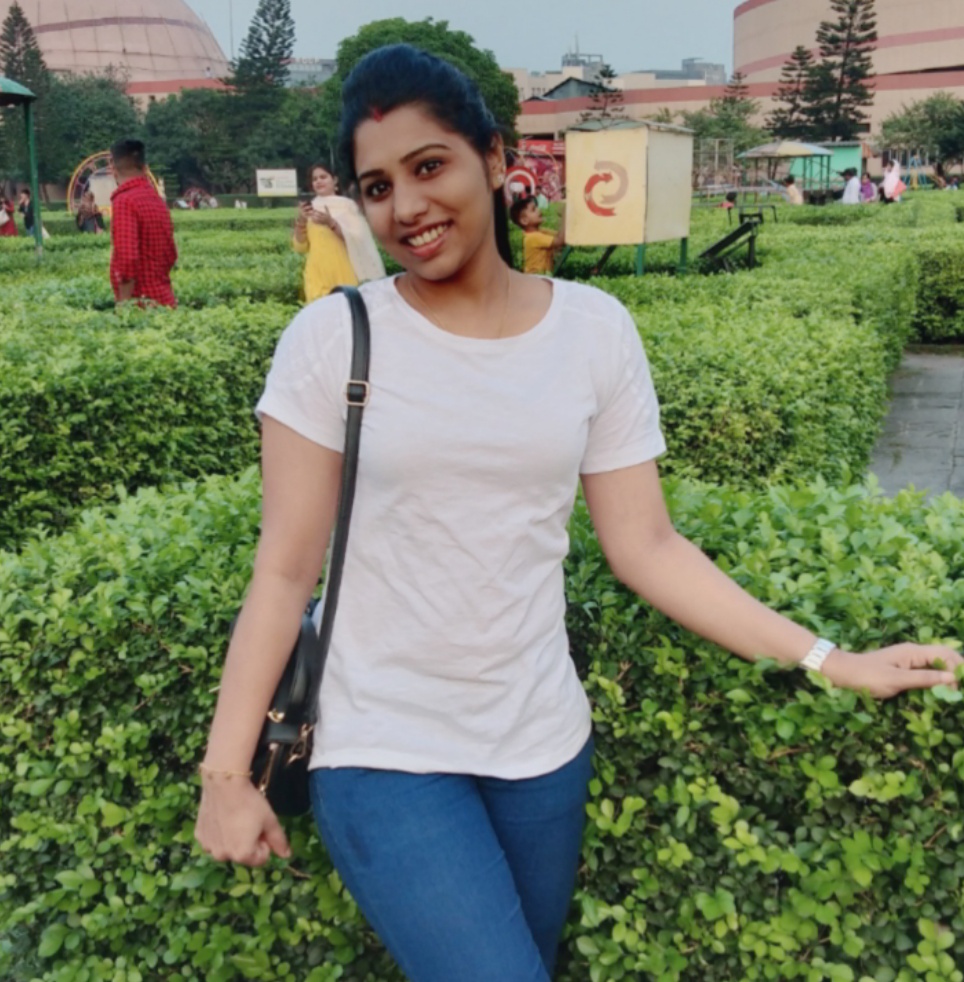 Mrs. Saranya Balu, currently working as a Senior Research Assistant under DBT, Govt. of West Bengal funding project- “Bioremediation of Poly Aromatic Hydrocarbons in the Sundarbans by application of phototrophic biofilms”. She holds a Bachelor degree in Biochemistry (2011) from University of Mysore, Karnataka and completed her Masters in Biochemistry (2013) from Bharathiar University, Tamil Nadu. She was working as a Senior Research Fellow in ICAR funded project titled “Network project on High Value compound and phytochemicals” at ICAR-Indian Institute of Spices Research, Kerala. She has published a paper titled, “Turmeric and cinnamon dominate in antioxidant potential among four major spices” in Journal of Spices and Aromatic Crops and awarded with H.S.Mehta Memorial award for Best oral presentation in SYMAC viii (2015) for the same. Her current work includes isolation of phototrophic biofilms from Sundarbans and their effect on bioremediation of poly aromatic hydrocarbons.Also estimation of ployaromatic hydrocarbons in water and soils fromSundarbans regions. 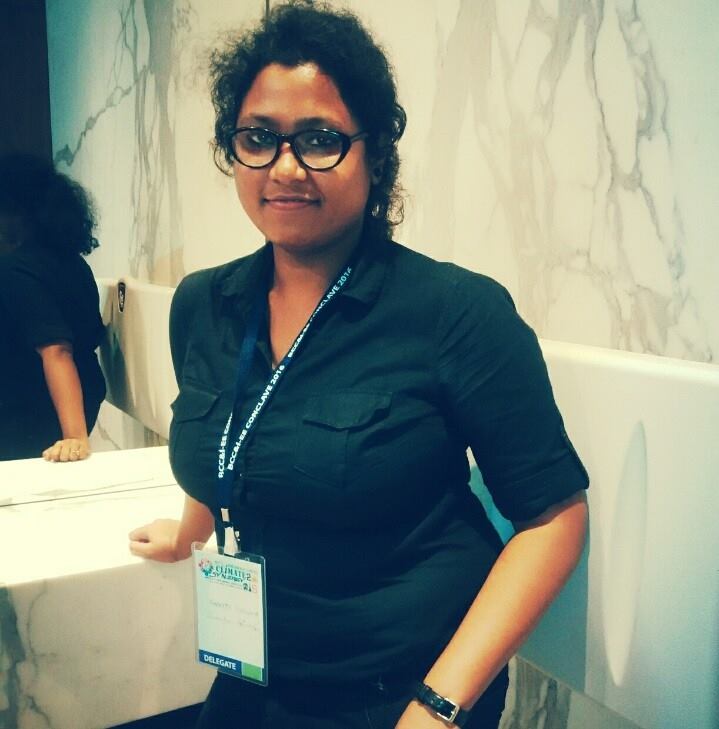 Ankita Bhowmik is currently working as Junior Research Fellow at School Of Environmental Studies, Jadavpur University. She is B. Tech. in Chemical Engineering from West Bengal University Technology (2016) and M.Tech in Environmental Biotechnology from Jadavpur University (2018). Her dissertation in Bachelor’s degree was on “Experimental investigation of degradability of Polyethene (PE) under different media in comparison with biodegradability of Polylactic Acid (PLA) and synthesized potato and maize starch film” and during the Master’s degree dissertation she worked on “Production of an Organic Fertilizer by Utilizing Slaughterhouse Wastes: Process development and Product Characterization”. Now she is working as JRF under DST funded project- “Production of organic fertilizer by utilizing slaughterhouse wastes and its application for the cultivation of potato and vegetables”.

Shantanu Bhunia, working as Junior Research Fellow at School of Environmental Studies of Jadavpur University.He completed his B.Sc. in Botany from Vidyasagar University (2015) and M.Sc. in Botany with Microbiology specialization from Vidyasagar University (2017). During his postgraduate dissertation, he worked on ‘Biotechnological potentials of endophytic microorganisms of Jangalmahal; part of West Medinipur district, West Bengal’. Shantanu is now working as JRF under DST sponsored project ‘Production of organic fertilizer by utilizing slaughterhouse wastes and its application for the cultivation of potato and vegetables’.

Arup Ratan Roy, currently working as a CSIR-Junior research fellow has B.Sc. degree with honours in Botany(2014) from Vidyasagar College under University of Calcutta and M.Sc. degree in Botany(2016) with specialization in advanced plant physiology biochemistry and plant molecular biology from department of Botany, West Bengal State University, Kolkata. He has cleared GATE (2018) in life science and CSIR-UGC-NET(2017) in life sciences with JRF AIR-121. His Ph.D. work is based on the identification of cyanobacteria of Indian Sundarbans using polyphasic taxonomic approach.